Guest Blog Post: How Sharp Is Your Seventh Sense?

Below is a guest blog post from my friend, and entrepreneurial genius, Bill Bartmann. I hope you enjoy this post, please feel free to leave a comment or share it with a friend if you do.

How Sharp is Your Seventh Sense?

You know about your sixth sense, but your seventh is just as important.

Your sixth sense—intuition—is your gut feeling and it’s a useful tool for sizing up people and opportunities.

Haven’t heard of your seventh sense? It’s your ability to estimate. It’s different because estimation is more of a logical process. I first learned of its business value when I left home at age 14 to join the carnival. One of my early jobs was to run the “Guess Your Age and Weight” booth. I first tried to guess people’s age and weight until the booth owner slapped me upside the head: “Hey kid, quit being so accurate. I want them to win, okay? If they walk all over the midway with a giant stuffed bear and our banner, it’s free advertising for me. The less accurate you are, the more money we’ll make.”

That was a real eye-opener for me, because I began to understand the nuances behind estimating.

In my subsequent 40 years in business I’ve come to learn several more lessons about how to sharpen this sense.

1. Don’t overestimate your intelligence and underestimate the intelligence of others. As a cocky, freshly-minted millionaire in real estate I soon thought I saw a tremendous opportunity in the oil & gas business. I concluded that the locals were indeed yokels and that they were just too dumb to take advantage of the riches beneath their feet.

I cashed in my real estate chips and moved them all into oil & gas wells—and promptly lost my shirt. The lesson? Rather than let my tongue hang out over the prospect of riches, I should have reeled it back in and asked myself: “Could they know something I don’t? Why might others also see this opportunity but not jump at it?”

2. Step back for a clearer view. I later made a billion-dollar fortune from scratch by correctly estimating the wave of defaulted consumer and business debt to wash over our economy in the

1990s. It wasn’t due to my intuition but instead to stepping back, looking dispassionately at prices and volumes, and extending trend lines. My competitors could have done the same thing but my guess is they were way too buried in daily operations to see above the forest.

3. Create a feedback loop for your estimates. One of the keys to growing my multi-billion-dollar business was that I made an unbreakable rule: On every single defaulted loan we bought—and we bought millions of them—we always compared actual results to our original estimates. We then find-tuned our estimating engine for the next round of purchases. I know it’s more fun for entrepreneurs to look to the future, but it’s crucial that you continually sharpen your estimation tool against results and adjust accordingly.

4. Don’t underestimate other people’s fear. My company did the first-ever securitization of unsecured, delinquent credit card debt. We were the darlings of Wall Street, which invested several billion dollars in my firm. That was until an anonymous letter surfaced with allegations about my company. I incorrectly estimated that investors and the rating agencies would listen to reason and we could calmly analyze the facts. They listened politely—and then bolted for the door. Within literally days I had lost a personal fortune of more than a billion dollars. Had I properly estimated their level of fear, I would have gone into survival mode and not into talking/ reasoning mode.

5. Identify the other party’s dominant motive. When my company was in crisis I agreed to step aside temporarily, even though I had a controlling interest in the stock. I made this move because I incorrectly estimated that the new caretakers would care as much about the company as I did. Only after it was too late did I realize why they made several cataclysmic decisions—they were too new to the company to care about its long-term survival, and merely were executing a short-term salvage operation.

To make matters worse, I continued to apply wishful thinking to the equation by repeatedly estimating that if I just worked harder and smarter, I could bail out water faster than my business ship was taking it on. If I had accurately estimated that we were in fact swamped, my decisions would have been different.

Why do we sometimes see things more clearly in hindsight? Partly it’s because we can more easily identify the important factors that determined the outcome. It’s also partly because we’re more likely to see things as they actually turned out instead of how we hoped they would turn out.

The philosopher George Santayana said: “Those who cannot remember the past are condemned to repeat it.” In order to realize your brightest business future, you owe it to yourself to hone your seventh sense on the grinding wheel of past results, facts, and rational perspective. 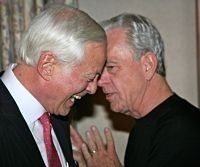 If you’d like to learn what makes a business successful and profitable, please join Bill and I, today, on our free webinar.