The Four D’s of Financial Success

Start From Nothing and Become Financially Independent

More than eighty percent of self-made millionaires in America began with nothing or in many cases, less than nothing. I can certainly relate to that because when I was growing up and right into my early 30s, I never had any extra money with which to start a fortune. It seemed to me that there was always enough, if not more than enough bills, to absorb every penny I earned. I was always in debt.

Be Ready for Your Opportunity
And even if a great business opportunity did come along, I wouldn’t have been able to do anything with it. As I began studying financial success and self-made millionaires, I noticed that almost everyone around me was in pretty much the same boat. The idea of becoming really wealthy was a distant dream with very little possibility of coming true. You may be in the same situation, with more bills than money or assets.

Look at the Numbers
The statistics are a little scary. Of 100 people who reach retirement age, according to insurance industry statistics, only one will be wealthy. Four out of the hundred will be financially independent; fifteen will have some savings put aside. And the other 80 will be dependent on pensions, still working or broke – this after a lifetime of well-paid work in the most affluent society in human history. Now why does this happen?

Why People Retire Poor
There are two main reasons why people retire poor. First, they never decide to retire rich. They wish and hope and pray, but they never make a firm, unequivocal decision that they’re going to do it. Second, even if they do decide to retire rich, they procrastinate until it’s too late. They always have some good reason for putting it off.

Start With Desire and Decision
If you sincerely want to beat the odds, to achieve financial independence and retire wealthy, there are four critical steps that you must take, all starting with the letter D.

The first step is desire. You must want it badly enough to make an unshakable commitment and to be willing to make sacrifices. The second D is decision. You must make a decision right now to do whatever is necessary, to be willing to pay any price, go any distance, to achieve your goal.

Practice Determination and Discipline
The third D is determination, which is to keep at it until you succeed in spite of all the problems and obstacles you will experience. And the fourth D is discipline – the discipline to master yourself to develop the habits necessary for achieving financial independence.

Those are the four Ds. Desire, Decision, Determination and Discipline. And you can measure how successful you’re going to be in the future by measuring how well you’re doing in each of those on a scale of one to ten.

Action Exercises
Here are two things you can do immediately to put these ideas into action.

First, make a decision, right now, that you are going to be financially independent, no matter what obstacles you face in the short term. Then write it down, make a plan and start to work on it every single day.

Second, resolve in advance that you will persist in the face of every setback or obstacle you face. You will never give up. You will keep on moving forward until you finally achieve your goal. 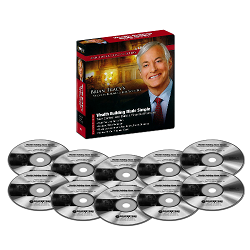