An Attitude of Gratitude in Uganda, Africa

I often speak about having an attitude of gratitude and how this simple saying can have so much power to change your life and the lives of others. Today we’re taking it to another level, as a couple of my top executives traveled to Uganda, Africa to experience it firsthand. After learning about their tremendous experience, I insisted I interview them and share their incredible story with the world.

Let me start with some background…

This past week Brian Tracy International was honored as a Contributing Sponsor for the Simple Wealth Academy, a 4 room school for 280 children with 2 latrines and training for 3 teachers in Luweero, Uganda. Eric Berman (my business partner) and Chelsea Frederick (my Marketing Director) attended the opening ceremonies, ribbon cutting, and saw the Brian Tracy International plaque in our name posted in one of the classrooms. 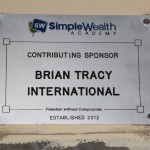 This all began last year when we decided to offer you a program called Trusted Authority from our friends at Simple Wealth (led by Greg Habstritt and Kourosh Assef). What you may not have known was that a portion of money generated from that program was donated to build a school in Uganda through the efforts of the Just Like My Child Foundation, who since 2006 has been transforming humanity by empowering women and children to reach their full potential through improved Health Care, Education and Microenterprise in Uganda.

First, let me share with you a little background about Uganda:

-To date, 17 million Africans have died of AIDS.
-25 million Africans (many of whom are children) are infected with the HIV virus. More than the Holocaust and the tsunamis.
-Every 30 seconds a child in Africa dies of malaria – that’s 3,000 children every day.
-12 million children are already orphaned by AIDS.

In addition many kids are often kept at home to work and never educated which facilitates the same issues that have lead to these staggering statistics. Vivienne Glyck, the Founder of Just Like My Child, often speaks about giving a ‘hand up,’ not a ‘hand out’… “With hand outs people don’t LEARN and behavior doesn’t change. In order for them to self-sustain, the people in Uganda need to be educated.”

Now it’s time for me to share some words first hand from Eric and Chelsea about their experience and journey: 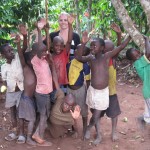 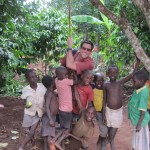 Eric: “When we started out on this trip, we didn’t really know what to expect. Neither of us had ever been to Africa, and now we were going with a group of 22 outstanding partners, business colleagues, and other incredible people to experience 7 action-packed days of safaris, masterminding, and the grand opening of the school.”

Chelsea: “It’s not often that you get the opportunity to not only travel to a third world country, but that you get to really immerse yourself in the community and interact with them on a level where they welcome and appreciate you. We really made a point to go into this trip with both open hearts and minds, and take in everything we could from this experience. Uganda is a beautiful country and the people are amazing and extremlywelcoming. . Overall the experience was completely life altering for both of us and a lot of others in the group which is why we want to share it with you.”

Eric: “Yes, the scenery on the safaris was beautiful. We were in a different area almost every night so we really got to experience the city life and the markets as well as the rural areas. However, it’s the experience we had with the kids and visiting the villages that we want to share with you today.

The beginning of our day started with the Ugandan Farmers.  One of the programs that Just Like My Child has created is called “Project GRACE.” The program involves locals in very rural villages that meet specific criteria to become farmers for this program.  Those that are chosen for the program have to be HIV positive, were in very dire situations, and have prove their ability to maintain adequate conditions for the gifts they are to receive. For instance they have to build the houses for their animals to live in. They’re given all the instruction and tools they need to do it, but they have to be an active participant in the process. These gifts are in the form of two animals (typically a male and female pig or goat), along with some food and training.  With these gifts, these recipients become well on their way from building their own farming business.”

Chelsea:  “The incredible thing we learned about this program is the “pay it forward” concept where once the farmer has sustained their farming business and the animals produce more animals, they’ll gift animals to other farmers creating generations of successful, sustainable farming and families able to support themselves.” 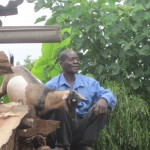 Eric:  “So our first experience was at one of the successful farmer’s house.  The farmer has already generated money from his 2 pigs to buy a goat and he also had been able to give 2 of his piglets to another family in need!”

Chelsea: “Yes, one farmer (who earned the status of ‘model farmer’ – this is an incentivized program where they receive extra farming equipment for their accomplishments) wrestled his goat out of the 2-story house he built for his animals just to show him off for us. Here’s the picture… he was so proud of his goat and of himself, it was inspiring.”

Eric: “After visiting the farmers and a brief lunch at the hospitals that were built thanks to the foundation, we headed off to what was our life changing part of the day.” 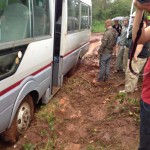 Chelsea: “It started pouring rain on our way out there and the roads in Uganda are not great… you think we have bad potholes in America? You haven’t seen anything yet. We had to take a dirt road for several miles to the school and about 2 miles out, and the bus got stuck in the mud. At that point we all began to doubt if we were eveng going to make it to the schoolCheck out the picture below.

We eventually freed ourselves from the giant pot hole, but we were already 2 hours late and the kids had been waiting for us. Little did we know that the kids and the teachers had been preparing for this ceremony for 4 months, which was obvious by the incredible welcome we received.”

Eric: “I think a life-altering shift took place in all of us the moment our bus turned the corner. All we heard was screaming and cheering and hundreds of kids running to greet us… there wasn’t a dry eye in our group at that moment. I never thought I’d experience anything like that. Check out the video of our arrival below.”

Chelsea: “It’s hard to describe what happened to each of us at that single moment… but there was a definite positive shift amongst the group. Imagine all of these smiling faces looking up at you in the middle of a jungle anxiously waiting your arrival just to thank you, appreciate you and see you. They were singing and dancing…. Eric jumped in and started dancing with the kids and playing drums, myself and others quickly followed suit…this was out of our comfort zones, but it just felt so natural and freeing in that moment. Going in I didn’t realize how much we helped them and I definitely didn’t expect the profound effect they had on us. In the end, they gave us so much more than we gave them.”

Eric: “One thing that was really cool was that the kids LOVED seeing pictures of themselves in any form, so we had our iPads out and were shooting videos and taking pictures of them. They loved it and the expressions on their faces were all we needed to stay at it for hours.”

Chelsea: “Yes, that part was incredible, being surrounded by kids just waiting to see themselves, it was amazing. After we spent some time with the kids and our iPads, the opening ceremony began. It started with a performance from the choir and then Ugandan National Anthem. You can watch the video of the opening song here:”

Eric: “The ceremony was obviously well rehearsed by the kids and teachers. A lot went into it and they all spoke about how much this meant to them.  Vivienne, Greg, and Kourosh were presented with a Certification of Appreciation and Greg and Kourosh gave out a school starter kit with a notepad and pencils for each kid. The tears started all over again!

These kids are going from a learning environment that’s one room with all levels together versus now being divided by age and ability.At the end of the ceremony the teachers and children brought out gifts to Greg and Kouroush, including mangos, pineapples, a handmade wicker rug, and more. It was a very touching moment.

Chelsea: “After the ceremony came the ribbon cutting and official opening of the Simple Wealth Academy. 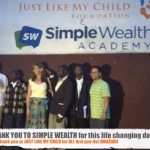 As soon as the ribbon was cut people filed into the first classroom and the kids all broke out into song and dance again. That was another incredible moment.

Eric: “Now, we get to the plaque presentation. It was an honor not only to contribute, and be there for the ceremony, but to have a plaque in a classroom that generations of children will see is incredible. We are so honored to be a part of something that will have such a profound positive effect on so many children’s lives.”

Chelsea: “Definitely an honor and I’m so grateful that we could be there for the opening of the school. Following the celebration of the ribbon cutting it was candy time! These kids and even the teachers went nuts… we were throwing out handfuls of candy and they were literally diving for them. It was an incredible site to see!”

Eric: “After the candy was gone it was time to say goodbye. We’ll never forget the smiles on those kids’ faces, the energy of the ceremony and the experience of giving something so great.”

What we want to remind everyone of is that when things in your world seem bad, it’s important to remember that there’s a whole world out there that doesn’t even have what we consider basic needs, yet they still have a higher level of happiness in their lives. We need to remember to be grateful for what we have and practice having an attitude of gratitude.

We’re a society that’s always wanting for something. Giving back, even just a little, whether it’s your time, expertise, money, etc. can go such a long way. Best of all, it can be the most rewarding thing you can do for yourself.